Superstar Rajinikanth spotted at a theatre! Which movie did he watch? Deets inside... 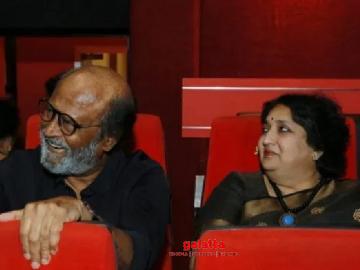 Two biggies released for this Deepavali, in Kollywood - Thalapathy Vijay's Bigil and Karthi's Kaithi. Both the movies have been vying with each other for Box Office honours and the crowds have been flocking to the theatres to catch these movies on the big screens. Superstar Rajinikanth is a legend and whatever he does creates quite a sensation. Recently, some photos of Superstar Rajinikanth at a theatre, along with his wife Latha Rajinikanth, have been doing the rounds on the internet! The netizens have been speculating wildly that he would have gone to watch either Bigil or Kaithi... Any guesses which of these two he watched?

Well, unfortunately for the fans of both Thalapathy Vijay and Karthi, it is neither! These recent photos of Superstar Rajinikanth at a theatre were clicked when he had participated in a special screening of the upcoming Malayalam movie Shyama Ragam. This movie, starring Shanthi Krishna also stars Y. Gee. Mahendiran in an important role alongside newcomers Pranav Suresh and Presidha Udhay. Shyama Ragam has been directed by Sethu Eyal and bankrolled by K Vijayalakshmi and Leena Anandh.

Superstar Rajinikanth, Latha Rajinikanth and many other celebrities watched a special screening of Shyama Ragam at the Le Magic Lantern Preview Theatre, at Nungambakkam. Reports state that following the screening, the Superstar had warm words of praise for the entire team of Shyama Ragam and wished them the very best!