First mass statement about Rajinikanth's Darbar trailer - check it out! 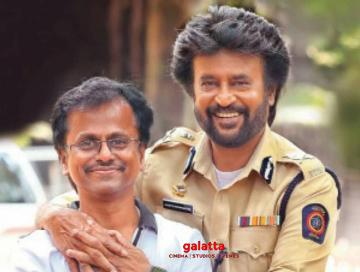 ‘Superstar’ Rajinikanth’s upcoming film, Darbar, produced by Lyca Productions under A. R. Murugadoss' direction is gearing up for a worldwide release on January 9, 2020 as a massive Pongal treat. An out-and-out action cop drama, the film’s audio composed by Anirudh Ravichander was released last week and has been receiving a tremendous response. With the audio launched and all sights now set on the film’s theatrical release, cinematographer, Santosh Sivan took to his Twitter page to convey his birthday wishes to Rajinikanth as the iconic veteran actor turned politician will be turning 70 tomorrow (December 12). Furthermore, the 12-time National Award winner dropped a reference about the Darbar trailer despite not revealing the date or time as to when it would be released. There are speculations doing the rounds on social networking forums that the trailer could likely be released as a birthday treat for 'Thalaivar' fans, but an official statement from Lyca Productions is now awaited. Check out Santosh Sivan's tweet below:

With Santosh Sivan now declaring that a trailer for Darbar will be out, that clears all talks about a teaser for the film getting released. The film is the second occasion the Chekka Chivantha Vaanam cinematographer is working with Rajinikanth after making his Tamil cinema debut in 1991 with the cult classic blockbuster, Thalapathi, under Mani Ratnam’s direction. Rajinikanth plays the role of a top-ranking police official named Aaditya Arunasalam and will be donning the khakhi for the first time after the 1992 film, Pandiyan.

Nayanthara will be seen alongside Rajinikanth for the fourth time in the upcoming Darbar after her previous appearances in Chandramukhi, Sivaji and Kuselan while Bollywood actors Suniel Shetty and Prateik Babbar are playing the antagonists and actress Nivetha Thomas and comedian Yogi Babu have been cast in major supporting roles.