Director Gautham Menon has gone on to garner a huge following with his films over the years and is currently awaiting the release of his long-delayed, Enai Noki Paayum Thota, starring Dhanush, which is expected to hit theatres on November 15. Apart from ENPT, he had also wrapped up work on a web series centered on former Tamil Nadu Chief Minister, Jayalalithaa, and also has a final schedule to wrap up on his action spy thriller, Dhruva Natchathiram, starring ‘Chiyaan’ Vikram. Apart from showing his prowess as a filmmaker, GVM has forayed into various other branches of filmmaking like singing and had also sung the hit, 'Neethane Enthan Ponvasantham' song composed by Ilaiyaraaja for his 2012 romantic drama film, Neethane En Ponvasantham. Now, Gautham Menon has crooned the 'Uyirae Vaa' song along with Alisha Thomas for the upcoming Tamil comedy film, Puppy, composed by Dharan, for which a video has now been released. 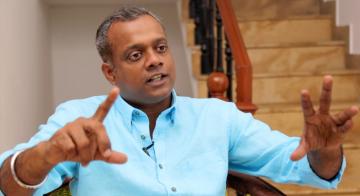 Gearing up for its theatrical release on October 11, Puppy directed by Nattu Dev under Dr. Ishari K. Ganesh’s Vels Films International banner has Varun and Samyuktha Hegde as the lead pair with Yogi Babu in a major supporting role. Samyuktha Hegde has become a rage among youngsters after starring in Jayam Ravi’s hit, Comali, while Varun is known for starring in films namely Thalaivaa alongside ‘Thalapathy’ Vijay and Jayam Ravi ‘s Vanamagan and Bogan, with Puppy set to be his debut as a hero. Promotions for Puppy are being carried at an active pace by the makers who released a motion poster, which generated quite a lot of talk followed by the film’s trailer, which went on to receive a stellar response.

Check out the ‘Uyirae Vaa’ song sung by Gautham Menon for Puppy below: