Actress Priya Bhavanishankar, who owns a huge fan base on social media, was last seen in Karthick Naren’s stylish action thriller, Mafia: Chapter 1, that featured Arun Vijay and Prasanna in the lead roles. With people all over the nation requested to stay indoors and be on quarantine, to prevent the spread of corona virus, Priya engaged in a live chat session with her followers on Instagram. During the chat, she discussed and talked about various topics including films, her likes and dislikes, beauty tips, body fitness, relationships, and whatnot!

When she was asked about her celebrity crush in Tamil cinema, without a delay, Priya revealed that it was Madhavan aka Maddy! Yes, she posted, “It’s a long time and a never ending one - Madhavan”. Well, it looks like she has been fond of Maddy since her teenage days! It is a widely known fact that Madhavan still enjoys a huge fan following, mostly comprising women folk.

On the work front, Priya Bhavanishankar is quite busy with various projects. She is a part of Kamal Haasan’s Indian 2, directed by Shankar and her character in the film will have significant importance. She will also be seen in films like S.J.Suryah’s Bommai, Atharvaa’s Kuruthi Aattam, Kalathil Sandhippom, and Manoj Manchu’s pan-Indian film, Aham Brahmasmi. 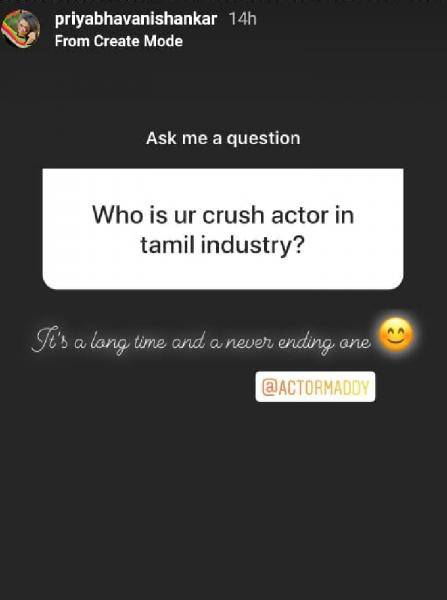