As production on Ponniyin Selvan continues to carry forward, Master Raghavan Murugan, who appeared as a child artiste in films like Sethupathi, Maari 2 and Bhaskar Oru Rascal to name a few, posted selfies with Aishwarya Rai on Instagram, including a few images on his Stories feature. In one of the Instagram Stories, Raghavan confirmed that he will be playing the role of a Pandiya prince at his young age, while Aishwarya Rai is portraying the character of Nandini Devi. Fans who have read Ponniyin Selvan will know that the character Nandini Devi is the prime antagonist in the novel and sets the chain of events in the story. Check out the photos below: 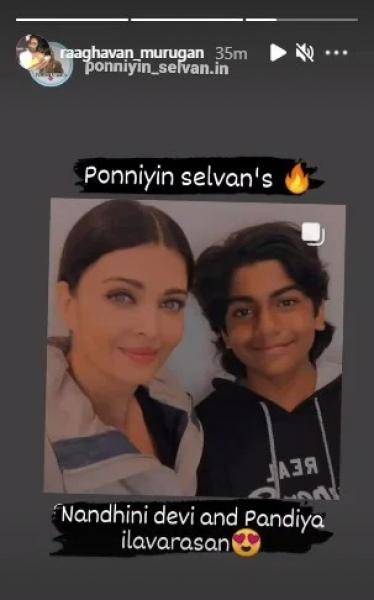 Ponniyin Selvan has an incredible technical team on board starting with Mani Ratnam's frequent collaborator Academy Award-winning composer A. R. Rahman for the songs and background score, with their partnership spelling success each time and expectations high once again that they will deliver a memorable album yet again for the film's first installment. A joint production venture between Allirajah Subaskaran's Lyca Productions and Mani Ratnam's Madras Talkies, Ponniyin Selvan has Ravi Varman handling the cinematography, Sreekar Prasad taking care of the editing and Thotta Tharani as the art director.