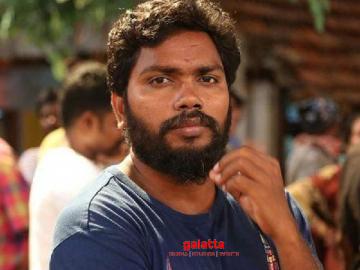 Despite having made just four movies, Pa Ranjith has established himself as a name of repute in Kollywood. He is currently working on his next movie, a Hindi venture - a biopic on the life of freedom fighter Birsa Munda. He is not just a director but a well-known producer too. His very first production venture Pariyerum Perumal turned out to be an awards grosser and is considered one of the most critically acclaimed movies in recent times. Meanwhile, his second movie as a producer - Irandam Ulagaporin Kadaisi Gundu, is now all set for release and the date has also been fixed!

A tweet from the movie's official Twitter handle states that Irandam Ulagaporin Kadaisi Gundu (IUKG) is all set to release on December 6th. The tweet also mentions that the Tamil Nadu theatrical rights of this movie has been bagged by Sri Urumanathar Pictures. IUKG stars Attakathi Dinesh and Kayal Anandhi in the lead and is directed by Athiyan Athirai with Riythvika, Munishkanth and RJ Ramesh Thilak in important supporting roles. John Vijay and Lijesh are also said to be a part of the cast! Tenma has scored the music for this movie!

IUKG is said to be based on the life of a lorry driver and the workers of a scrap mart, who come across a bomb from a bygone war! The director wants to express the long-lasting effects of war and how it affects the lives of people across generations. Director Athiyan Athirai has himself had a long struggle before realising his dream of directing a movie and we wish him all success for his maiden directorial venture!