Jr NTR's heroine and villains of RRR announced! Check it out here... 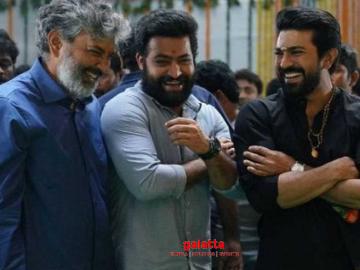 Yesterday, the RRR team had posted that they would be unveiling the details of Jr. NTR's heroine as well as the villains of the movie, today! As promised, the makers of the magnum opus RRR have revealed that Olivia Morris would be playing Jr NTR's heroine Jennifer in this movie. Former Bond girl Alison Doody has been roped in as the lead antagonist Lady Scott, as has Ray Stevenson, who will be playing Scott. This fits with the theme of the movie as it is said to be a fictionalised account of the lives of two famous freedom fighters - Komaram Bheem and Alluri Sitarama Raju.

RRR directed by SS Rajamouli, is his first project after the super successful Baahubali franchise and it is reportedly being made on a budget of Rs. 350-400 Crores. This movie is being bankrolled by DVV Danayya, under his DVV Entertainments banner. Earlier, it was revealed that Alia Bhatt had been roped in as Ram Charan's heroine and this movie would be marking her Tollywood debut. Olivia Morris is a graduate from the Royal Welsh College of Music & Drama and is touted to be Jr NTR's pair in RRR.

Alison Doody is an Irish actress and model who debuted with a small role in the 1985 James Bond movie A View to a Kill and has also played an antagonist to Harrison Ford in the 1989 movie India Jones and the Last Crusade. Ray Stevenson, who has been signed on to play another lead antagonist, is also an Irishman who has starred in a number of top Hollywood movies including GI Joe: Retaliation, Thor, Thor: The Dark World & Thor: Ragnarok! As revealed by the makers, 70% of RRR's shoot has been completed and the movie is being slated to hit the screens on 30th July, 2020! Stay tuned...

Welcome aboard #OliviaMorris @OliviaMorris891! We are happy to have you play the female lead #JENNIFER. Looking forward for the shoot. #RRRMovie #RRR. pic.twitter.com/7ZUtyLt6bq

#RayStevenson, it’s a pleasure to have you play the lead antagonist #SCOTT in #RRRMovie. Can't wait to begin shooting with you. #RRR. pic.twitter.com/T0nZnHlMxy

Welcome to Indian cinema, #AlisonDoody! Had a wonderful time shooting for your first schedule... We are glad to have you play lead antagonist #LADYSCOTT in #RRRMovie! #RRR pic.twitter.com/ELNUUS0g32