Nivetha Pethuraj rejoins Twitter with a new profile - check out!

After a long gap, actress Nivetha Pethuraj is back on the platform of Twitter, this time with a brand new profile. Nivetha had deactivated her Twitter profile in July 2018 citing that there is so much of negativity and hatred on the said micro-blogging platform. However, she stayed connected with her fans on Instagram and she was quite active there. After a gap of 1.5 years, it looks like Nivetha has decided to come back on Twitter with some positivity. She shared the news through a story on Instagram and she also mentioned the id of her new Twitter profile.

Those who would want to stay connected with the talented actress on Twitter, can follow her on Nivetha_Tweets. She has posted only one tweet as of now and it says, “Thanks for connecting with me on Twitter. Stay home, stay safe.” On the work front, Nivetha Pethuraj is awaiting the release of her next Telugu film, RED (remake of Arun Vijay’s Thadam), starring Ram Pothineni in the lead role.

She will also be playing the female lead in Sai Dharam Tej’s next film, directed by Deva Katta of Prasthanam fame. In Kollywood, Nivetha Pethuraj is awaiting the releases of her two films - Party and Jagajaala Killadi. Check out the screenshot of Nivetha Pethuraj’s announcement story below: 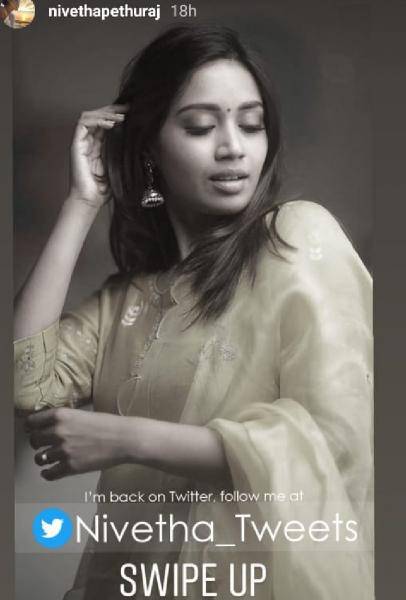 Great news for Anirudh fans | You can now 'Chill with Ani' from home!!!