Actress Aishwarya Rajesh is known for her impactful performances in different dimensions. She was last seen in the Tamil film, Namma Veettu Pillai, directed by Pandiraj and produced by Sun Pictures. Aishwarya played the role of Sivakarthikeyan's sister in that film which was a grand success at the box office. In her upcoming line up of films, MisMatch is one project which is currently in the post-production stages. This is a Telugu film, directed by NV Nirmal Kumar of Salim and Sathuranga Vettai 2 fame. MisMatch has Udhay Shankar playing the male lead and the love interest of Aishwarya Rajesh. 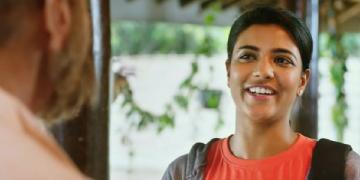 This film's trailer has now been released and it looks quite interesting. The trailer has a lot of action and emotions in it and we see the primary focus on Aishwarya. She will be seen as a wrestler in this film. Produced by G Srirama Raju and Bharath Ram, MisMatch is shot by Ganesh Chanddra and cut by Raja Sethupathi with music by Gifton Elios.

Aishwarya recently made her Telugu debut with Kousalya Krishnamurthy, which was the remake of Sivakarthikeyan's debut production venture, Kanaa. MisMatch will be Aishwarya's second Telugu film and it will hit the screens on December 6. For now, check out the trailer of MisMatch:

Exciting update on RRR to be revealed tomorrow!

WATCH: New Video Song From Action Is Out!