Having completed Darbar, Superstar Rajinikanth will now move on to his next, Thalaivar 168, directed by Siva of Viswasam and Vedalam fame. Produced by Sun Pictures, this film will be a rural emotional family drama with music by D Imman and editing by Ruben. The makers have now made a breaking announcement about the addition of a new member to the star cast. Keerthy Suresh, one of the top heroines of Kollywood, has been signed to play a very important role in Thalaivar 168.

Sun Pictures took to Twitter to make this announcement and this has made the fans excited. This will be the first time Keerthy will be sharing screen space with Superstar and this must definitely come as a great boost in her career. According to the reports that are surfacing online, Keerthy Suresh will be seen as Rajinikanth's younger sister in this film that will mainly focus on the sibling relationship. 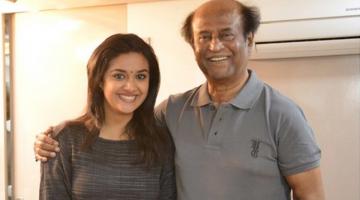 As for Rajini's pair, we had reported that Khushbu Sundar is the front runner to play the female lead and an official announcement on that is awaited. The film's shooting is expected to begin from the third week of December and is targeting a Diwali 2020 release.

We are delighted to announce that for the first time, @KeerthyOfficial will be acting with Superstar @rajinikanth in #Thalaivar168
@directorsiva#KeerthyInThalaivar168 pic.twitter.com/sy4uba5DNd

Extremely happy to announce this magical milestone in my journey .
From being awe struck of @rajinikanth sir to sharing screen space with him will be my most cherished memory in my life. Thank you @directorsiva sir @sunpictures 😊🙏🏻#Thalaivar168