Earlier today (June 29), Keerthy Suresh took to her official Instagram page to share an update regarding one of her upcoming projects. Keerthy will be seen playing one of the leads in Saani Kaayidham which is directed by Arun Matheswaran of Rocky (yet to be released) fame. Produced by Screen Scene Media Entertainment, the film features director Selvaraghavan as the other lead, and interestingly, the film marks his debut as an actor. The fans are eagerly waiting to witness the actor Selvaraghavan on the big screen and Saani Kaayidham seems to be an exciting film to watch out for. Saani Kaayidham also looks to be a film that will offer high scope for Keerthy Suresh, the performer, after Mahanati.

The talented actress joined the sets of Saani Kaayidham today morning for the new schedule and she shared the update on her Instagram page. Sharing a video of her travelling to the shooting spot, Keerthy Suresh wrote, "Back to #ShootLife #SaaniKaayidham #BackToWork". As the intensity of the second wave of Covid 19 is slowly reducing, all the industries have resumed work with precautions and the film industry also began production a few weeks before. It looks like the makers of Saani Kaayidham will shoot some of the important scenes featuring Keerthy and Selvaraghavan in this schedule. More details are awaited.

Saani Kaayidham is touted to a rustic action drama that has music composed by Yuvan Shankar Raja. Yamini Yagnamurthy will be cranking the camera for Saani Kaayidham. Keerthy's next release will most likely be Good Luck Sakhi which is a sports drama. The film is directed by Nagesh Kukunoor and features Aadhi Pinisetty as the male lead. Good Luck Sakhi has been shot in Telugu, while it will have a dubbed release in Tamil and Malayalam. Keerthy also has one film each with the Superstars of each industry - Annaatthe with Superstar Rajinikanth, Sarkaru Vaari Paata with Mahesh Babu, and Marakkar: Arabikadalinte Simham with Mohanlal. For now, check out Keerthy's latest update about Saani Kaayidham here: 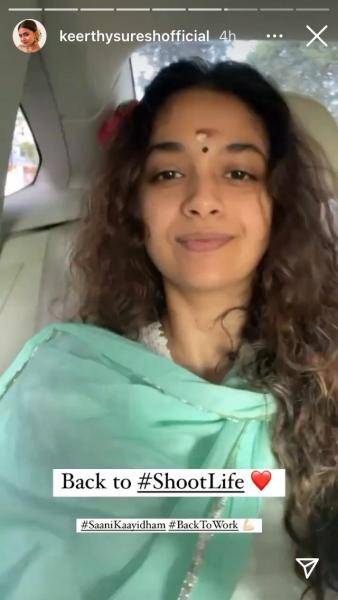