Kathir's Jada, which released yesterday (December 6) was his next film after the successful Thalapathy Vijay starrer Bigil. As like Bigil, Kathir is seen as a football player in Jada as well. Directed by debutante Kumaran and produced by The Poet Studios banner, this sports-horror drama opened to mixed reviews from the critics and the fans. This movie will see Roshini Prakash making her debut as the female lead with top stars like Yogi Babu, Kishore, Rajkumar, Nishanth, Lijesh, Aruvi Bala, Swathishta and a number of others, as part of the cast! 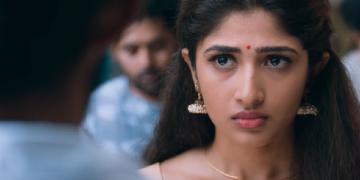 The makers have now released the video of the super hit song 'Apdi Paakadhadi' and this song is crooned by the sensational Anirudh Ravichander along with Swagatha S Krishnan. This romantic number is composed and penned by Sam CS. Anirudh's voice is an additional asset to the song as it brings a sense of freshness into the play. The visuals look breezy and capture the beautiful candid moments between the lead pair, Kathir and Roshini.

Richard Kevin and AR Soorya take care of the editing and cinematography departments respectively. This new video song has been released on the official YouTube channel of Think Music who owns the film's audio rights. Check out the newly released 'Apdi Paakadhadi' video song from Kathir's Jada here (below the images):

Surprise announcement from Suriya's new big film - check it out!

'Captain' Vijayakanth's son gets engaged - check out the viral pictures!