Surprise announcement from Suriya's new big film - check it out! 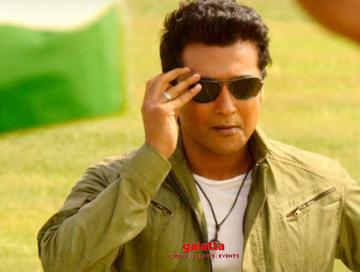 Actor Suriya’s 2019 was an eventful year as it saw two of his exciting films getting released - NGK and Kaappaan. The two films had come out after the star was last seen in 2018’s Thaanaa Serndha Koottam after which his fans had to wait for well over a year to witness him in action on the big screen once again. Suriya’s next film, Soorarai Pottru, also getting dubbed in Telugu as Aakaasam Nee Haddhu Ra, under Irudhi Suttru director Sudha Kongara, had wrapped up filming a while back and has been announced to come out as a summer 2020 release. With the film’s composer G. V. Prakash Kumar keeping fans posted regarding the various developments including revealing that the Soorarai Pottru teaser will be out as a Pongal 2020 treat, he has now announced yet again on his Twitter page that the much-awaited ‘Maara Theme’ track will be out in January 2020, which many speculate could likely be released as a New Year’s treat. We will know for sure from GV Prakash once again as we near towards the year end.

The ‘Maara Theme’ is already a major USP in Soorarai Pottru as it includes rap portions sung by Suriya himself, which have been penned by Arivu of The Casteless Collective. There are massive expectations surrounding the film as Suriya has been pitted against Bollywood actor Paresh Rawal, who will be making his debut in Tamil cinema as the owner of an airliner named JAZ Airways. Soorarai Pottru’s cast also includes Aparna Balamurali playing the female lead alongside Karunas, Kaali Venkat, among others in vital supporting roles while the technical team also has award-winning international stunt choreographer Greg Powell, who previously worked in notable Hollywood films such as Fast and Furious 6, Skyfall, Harry Potter and the Deathly Hallows (1&2), The Bourne Ultimatum, Lost in Space, to name a few.