Popular Kannada celebrity couple Raghu and Amrutha Ramamoorthy's household just got bigger as they welcomed their first child, a baby girl, on Thursday. Sharing the joyous news via an Instagram Story, Raghu wrote, "Angel has arrived, It's a girl". Post the announcement, wishes and congratulatory messages began pouring in for the couple from fans, colleagues and their film industry peers. The duo had earlier announced that they were expecting their first child on the occasion of their second wedding anniversary, with Raghu sometime back arranging a traditional baby shower for his beloved wife. Many notable celebrities had graced the intimate baby shower ceremony and wished the soon-to-be-parents for the next big phase in their lives. Check out Raghu's announcement of his baby girl below: 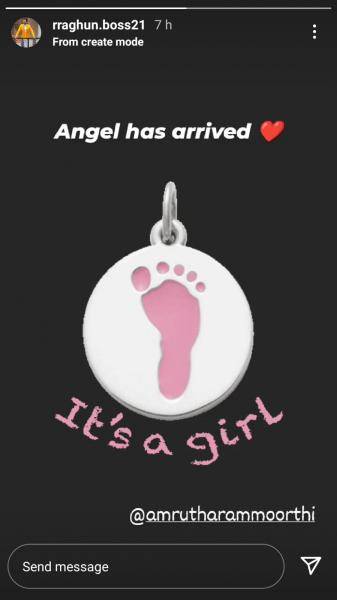 Raghu and Amrutha had dated for a few years and appeared as a couple on the popular TV show, Mr and Mrs Rangegowda, in which they played the lead characters Aishwarya and Rangegowda. They soon went on to become one of the most popular TV couples and won the 'Best Jodi' award for the serial. Raghu and Amrutha tied the knot in May 2019 in Bengaluru in line with the customs of a South Kangara Brahmin style and Gowda tradition wedding. At the time, Raghu in an interview with Times of India spoke about how they didn't really face any tough issues in convincing their parents about their love for each other. He said, "Our respective families were pressurizing for marriage. We both discussed and further decided to take our relationship a step ahead and then informed our parents. There were no objections for marriage from my end. Her mother also accepted us easily but her father took time to decide as he was very particular about caste. But after giving it a thought for about 10-15 days, he approved our marriage. Our families soon got together and decided on our engagement."

The couple have garnered a huge fan following over the years and enjoy a massive presence on social media. Raghu is currently playing the lead role on the Colors Kannada serial Nammane Yuvarani. As for Amrutha, she was last seen playing the character Mrudula in the show Kasturinivasa before making her exit recently.