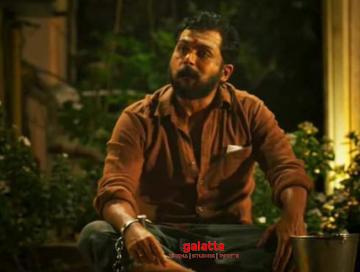 Actor Karthi’s latest film, Kaithi, released as a Diwali treat is getting a double thumbs up from both fans and critics alike and is en route to becoming a massive commercial success as well. Directed by Maanagaram fame Lokesh Kanagaraj, the action thriller has been released simultaneously in Telugu as well under the title, Khaidi, since Karthi enjoys a huge fan following in the Telugu-speaking states. Karthi plays a convict named Dilli with the plot revolving around him seated right in between a war between the police and underworld gangsters. With both versions of the film now out in theatres, reputed Telugu film distribution house, Sri Sathya Sai Arts, have now released an important scene from Khaidi, which is primarily featured on Karthi, Narain and Dheena planning an escape route through the jungles.

Both Kaithi and Khaidi have been performing exceptionally well ever since its release and has taken many by surprise, especially considering the film had come out alongside ‘Thalapathy’ Vijay’s Bigil. This was most notable earlier this week when Kaithi went on to collect in the USA on the fifth day of its release an estimated $23059 from 51 screens in comparison to Bigil, which made $22350 from 103 screens. A joint venture of Dream Warrior Pictures and Vivekananda Pictures, Kaithi also includes Anjathe fame Naren, Vijay TV Dheena, Mariam George among others in crucial others along with composer Sam C. S. for the music, cinematographer Sathya N Sooryan and editor Philomin Raj.

Check out the Khaidi highlight scene below: