Genelia pens a heartfelt statement for her son Riaan

Genelia's heartfelt message for her son! Check it out... 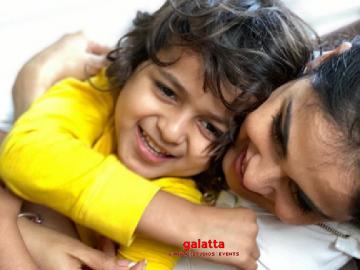 The pretty and bubbly Genelia D'Souza made a mark almost instantly, with her debut movie Tujhe Meri Kasam, in 2003 itself. Her role as the peppy and effervescent Harini in director Shankar's Boys, endeared her to the Tamil audiences and she became an instant hit amongst the youth, in South Cinema too. In her career spanning over 14 years, Genelia has acted in Hindi, Tamil, Telugu, Kannada, Malayalam and Marathi movies. She got married to actor Riteish Deshmukh in the year 2012 and her appearance in movies reduced considerably and she only made cameo appearances in a couple of movies.

Genelia and Ritesh have 2 sons together, with their firstborn being named Riaan and the second Rahul. Riaan had his birthday recently and his parents had a grand celebration for the event. Many leading celebrities and their kids attended the birthday party and had a gala time. Recently, Genelia uploaded a couple of photos of herself with Riaan on Instagram and added a very heart-touching note to the post. The note mentions how much Riaan means to her and how much she loves him. Differing from other parents who don't want their children to grow up but remain as a kid forever, Genelia mentioned that she wants Riaan to grow.

Genelia stated that she wants to enjoy seeing Riaan grow each year and into a "fine young man". She added that she wants to give him wings to fly and also be the wind beneath those wings. There were quite a few such touching lines in the post and we are sure that Riaan would be extremely touched when he grows up and looks back at this. Genelia was last seen in Kollywood, playing a journalist in Thalapathy Vijay's movie Velayudham, in 2011! While many of Genelia's fans are missing seeing her on the big screens, she seems to be happy with her family and being there!

Dearest Riaan, Every parent says “I don’t want him to grow up, I want to freeze this age forever”.. But I don’t.. I want to enjoy every year of yours, I want to see you grow into a fine young man, I want to give you wings to fly and I’d like to be the wind beneath those wings. I want to tell you that life is tough but you are tougher, I want you to always believe in yourself no matter what happens cause I will always believe in you.. Apart from everything I want and I wish for you, the one thing I never want to fail to let you know, is that I love you so so so much and you are the greatest thing that happened to me.. There is nothing I’d rather see than your smile and nothing I’d rather hear than your laughter. For all the things my hands have held, the best by far is you. Happy Birthday to the little boy who made me a Mom- My First Born ❤️