Dhruv Vikram reveals the real Adithya Varma - check out who it is! 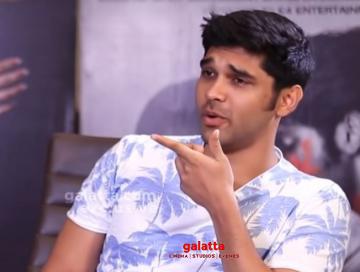 One of the year’s most anticipated films, Adithya Varma, will see National Award-winning actor Vikram’s son, Dhruv Vikram, making his acting debut. An official remake of the Telugu blockbuster, Arjun Reddy, the Tamil version gearing up for a theatrical release in India on November 22 has been directed by Gireesaya under Mukesh Ratilal Mehta’s E4E Entertainment. Bollywood actress Banita Sandhu is playing the female lead while Priya Anand will be seen in a major supporting role. The romantic drama was given an ‘A’ certificate recently by the Censor Board and promotions for the film are being carried out extensively by the team now. That said, Dhruv Vikram had taken to his Instagram page to post a story featuring footage from his father, Vikram’s breakthrough 1999 film, Sethu, synced to the audio from the Adithya Varma trailer. Check out the screenshot from the Dhruv’s Insta story below:

Expectations for Adithya Varma have been massive ever since the film began rolling with the songs composed by Radhan turning out to be chartbusters. The teaser as well as the trailer of the film received a thumping response from fans with many stating they were faithful to the original Telugu film. Adithya Varma is the second remake after Arjun Reddy was first remade earlier this year in Hindi as Kabir Singh with Shahid Kapoor and Kiara Advani in the lead roles.