By now, almost everybody knows that Superstar Rajinikanth's Darbar is hitting the screens, tomorrow (January 9th)! However, there was a question as to when the first show would happen, as the theatres and multiplexes have to obtain additional permission from the government to screen special shows, ahead of the normal shows, which start around 10:00 am. Now, a Government Order (GO) has been issued by the Tamil Nadu Government, granting permission to screen special shows on January 9th, 10th, 13th and 14th.

The General Secretary of the Tamil Nadu Theatre Owners and Multiplex Owners Association had written to the TN Govt., asking for permission to have special shows for Darbar and after due consideration and inputs from the Additional Chief Secretary / Commissioner of Land Administration, Chennai, this permission has been granted. However, the theatres and multiplexes can have special screenings only on four days - January 9th, 10th, 13th and 14th, as they are considered normal days. This permission applies for all theatres across Tamil Nadu! Considering that the GO grants permission for special shows, the first shows for Darbar begin at 4:00 am in Chennai and its surrounding areas.

For 2019, it was Petta Pongal as Superstar's Petta with director Karthik Subbaraj hit the screens and now 2020 seems all set to become Darbar Pongal! This movie, funded by Lyca Productions, is directed by AR Murugadoss and has music by Rockstar Anirudh. Nayanthara plays the female lead in Darbar, which also has Nivetha Thomas, Yogi Babu, Thambi Ramaiah and a whole host of other stars. Bollywood actor Suniel Shetty is making his Tamil Cinema debut, playing the antagonist in this movie! Stay tuned to Galatta.com for the Darbar review, first on net! 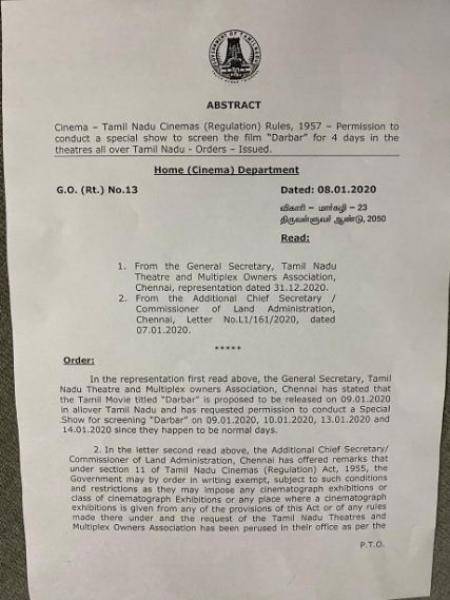 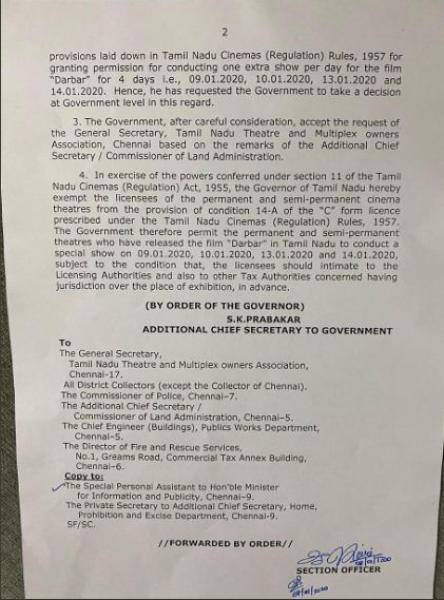