Mani Ratnam’s Ponniyin Selvan is going to be one of the biggest films ever made in Indian cinema and it has got humongous expectations from fans and ardent film buffs. This historical epic features a stellar star cast in the form of Chiyaan Vikram, Jayam Ravi, Karthi, Aishwarya Rai Bachchan, Trisha, Aishwarya Lekshmi, Ashwin Kakamanu, Vikram Prabhu, Jayaram, Prabhu, Sarath Kumar, Sobhita Dhulipala, Riyaz Khan and others. Bankrolled by Lyca Productions in association with Madras Talkies, Ponniyin Selvan has music by A.R.Rahman and cinematography by Ravi Varman.

The film’s costume designer Eka Lakhani, in her recent live chat session on Instagram, shared a few words about her working experience. One of her followers posed the question - “How challenging is Ponniyin Selvan? Do you think you can do justice to millions of people’s imagination?”. Answering the question, Eka replied, “I better! Have no option! Petrified and excited at the same time! It’s a dream come true for any costume designer to get to work on this film. I promise I’ll give it my best and hope to not disappoint!”

Eka Lakhani, who made her debut as a costume designer with Santosh Sivan’s directorial, Urumi, is widely known for her collaboration with Mani Ratnam in films like O Kaadhal Kanmani, Kaatru Veliyidai, Chekka Chivantha Vanaam, etc. Check out the screenshot of Eka’s story about Ponniyin Selvan below: 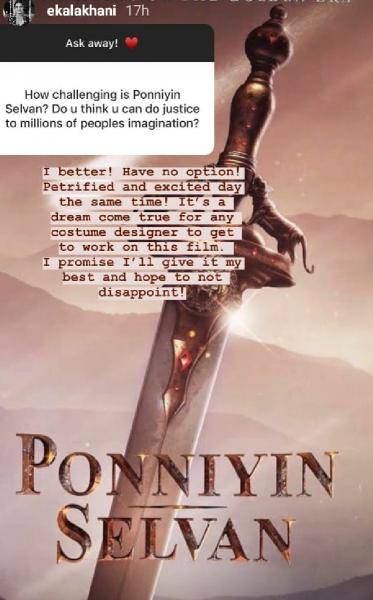