Cook with Comali sensation Pavithra Lakshmi will be making her debut as a lead actor in Tamil cinema with the upcoming untitled film produced by AGS Entertainment. Following the humongous box office success of Thalapathy Vijay's Bigil, this Pavithra Lakshmi starrer will be the esteemed production company's next project. Popular comedy actor Sathish will be turning a hero for this film. This untitled movie is touted to be a fun-filled comedy entertainer and it is directed by debutant Kishore Rajkumar. With cinematography by Praveen Balu and music composed by Ajesh Ashok, the shooting of this film has been wrapped up and the makers are currently busy with the post production works.

Pavithra Lakshmi took to her official Instagram page to share an exciting update on the progress of the film. She has started to dub for her portions in the film from today (August 23) and she shared the update on her Instagram space. Pavithra shared a picture from the dubbing suite and this update has made the fans look forward to the project. Going by the development of this project, it looks like we can expect the film to release by the end of this year.

Apart from this film, Pavithra has also acted as one of the leads in Kathir's upcoming action drama, Yuki, directed by debutant Zac Harriss. Yuki features Kathir, Natty, Narain, Pavithra Lakshmi, Kayal Anandhi, and Athmiya in the lead roles and has music composed by Ranjin Raj. Yuki is also currently in post production stages. The talented actress is also in talks to be a part of several other interesting projects in Tamil cinema and we can expect formal announcements regarding the same in the coming months.

Pavithra Lakshmi participated in the second season of Cook with Comali and the show gave her a massive breakthrough, making her popular among the Tamil audience. Pavithra's pairing with Pugazh was one of the major highlights of the show. For now, check out the latest update shared by Pavithra Lakshmi on her next film with Sathish here: 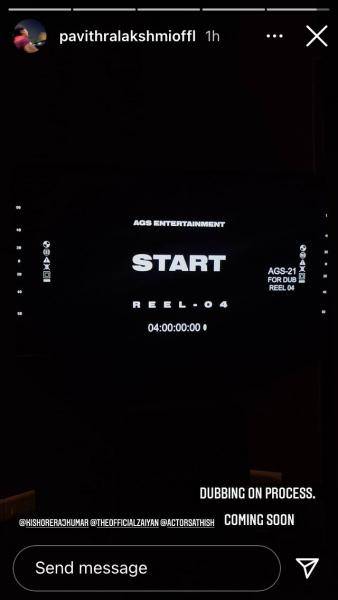