Chiyaan Vikram is right now busy shooting for his next, Cobra, which is directed by Ajay Gnanamuthu of Demonte Colony and Imaikkaa Nodigal fame. This action thriller has music by A.R.Rahman, cinematography by newcomer Harish Kannan, and editing by Bhuvan Srinivasan. More than half of the film’s shooting has been completed and the makers are working at a rapid pace to finish the film on time. The latest update is that the team has moved to Kolkata for their fourth schedule and some important scenes are expected to be shot in this schedule.

Director Ajay Gnanamuthu shared this update on Instagram and it has come as a delightful news for Chiyaan Vikram’s fans. Cobra is expected to portray Vikram in different avatars and the curiosity has been well maintained by the team. Produced by Seven Screen Studio in association with Viacom 18 Motion Pictures, Cobra features former Indian cricketer Irfan Pathan as the antagonist and KGF fame Srinidhi Shetty as the female lead.

The rest of the cast includes Super Deluxe fame Mirnalini Ravi, director K.S.Ravikumar, Anandaraj, and others. Post the completion of this new Kolkata schedule, the makers will most likely move on to Russia for the next schedule. Cobra’s first look is touted to be released in the last week of January, though an official word is awaited. 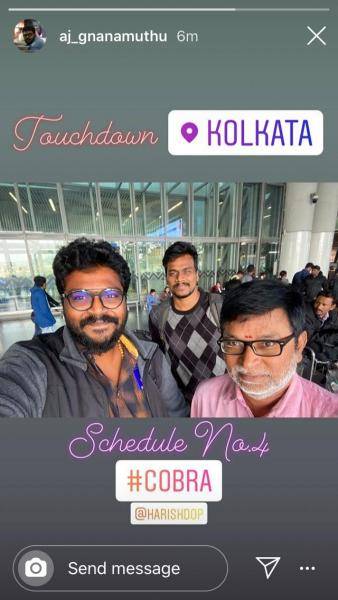