Popular Hindi television actor Kushal Tandon's mumbai">Mumbai restaurant Arbour 28 was damaged due to the heavy rains in Mumbai recently. In an interview to Etimes, Kushal opened up on the losses he incurred after the damage to the property and said, "Difficult to say but somewhere in the vicinity of ₹ 20-25 lakh approximately." Maharashtra recorded the heaviest rain in July in the last 40 years as regions like Sangli and Amravati have been on the verge of floods, while Kolhapur, Ratnagiri and Raigad ended up flooded. Other than these regions, around four landslides were reported in Raigad as a result of the torrential downpour. Check out below screenshots of Kushal’s Instagram Story in which he wrote, "Thanku mumbai rains for doin this to @arbour28mumbai as if COVID was not enough, like Nike, jus do it, you did it too. On brighter side of the story, thankfully no watchman or guard got injured." 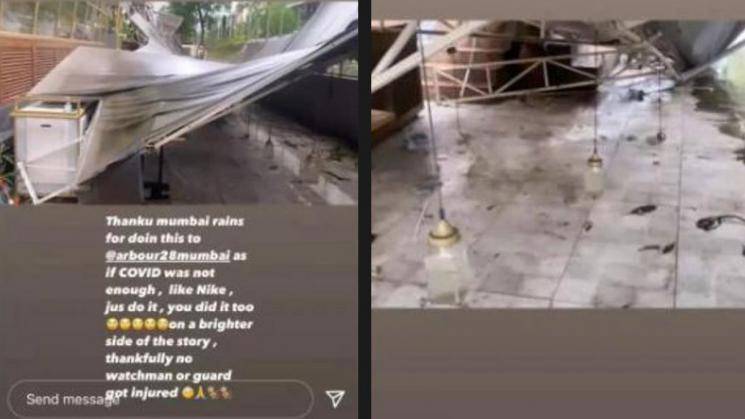 Kushal Tandon launched his Arbour 28 restaurant in 2019, with the grand opening ceremony turning out to be a glitzy and star-studded affair with notable TV personalities like Sidharth Shukla, Alvira Khan, Nia Sharma, Karanvir Bohra, Krystle D'Souza and Iulia Vantur gracing the occasion. Apart from the heavy Mumbai rains, the actor also pointed out how the pandemic played spoilsport in bringing down the flow of the business. Kushal said, "After Covid, business hasn't been too great. Moreover, twice it was shut down due to the lockdown. Abhi bhi bandh hi tha kyunki the time limit of opening is 4 pm and business is more so after 16:00 hours.". He further added that the road to recovery from these obstacles is not going to be easy. He said, "It was made with lots of love. I had called people from France to get a special cloth material to do it. It's a 6,000 sq feet place. So of course it won't be easy. But I am not going to wait. I'll get it rectified soonest."