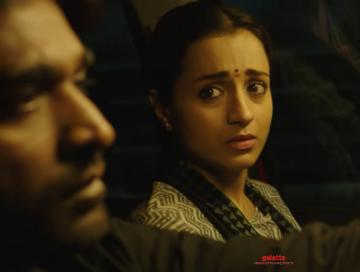 Vijay Sethupathi - Trisha starrer 96 is an evergreen romantic drama that will hold a strong place in the history of Tamil cinema's best romantic films. Ram and Jaanu have booked a forever place in the hearts of Tamil cinema audience. Director Prem Kumar treated the film very lightly throughout and that is what happened to be its best part as well. Govind Vasantha's blockbuster songs and soulful background score added to the beautiful emotions. Vijay Sethupathi and Trisha's lively and natural performances took it to another level and 96 became a favourite for many. More than a favourite, it became an emotion for a lot of youngsters.

The film celebrates its first year anniversary today (Oct 4). Yes, exactly on this day, last year, our audience witnessed Ram and Jaanu on the big screens and the rest is history. Marking this special occasion, the makers have released a new exclusively cut video of the song, 'Anthaathi'. This song didn't make it to the final cut of the film and the fans were worried about it. In this video song, the visuals aren't new, but the way it is put together is loved by the audience and it is evident through the comments on YouTube.

Anthaathi song is crooned by Chinmayi and Govind Vasantha with lyrics by Karthik Netha. The video of this beautiful number has been released on the official YouTube channel of Think Music. Check out the song video here: