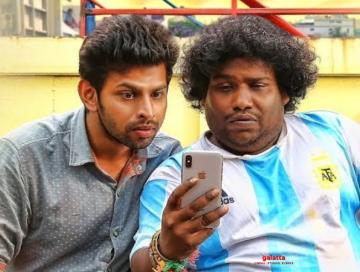 Gearing up for its theatrical release on October 11 is the much-awaited comedy film, Puppy, starring Varun and Samyuktha Hegde in the lead roles. Varun is known among fans for starring in films like Thalaivaa, Vanamagan, Bogan and the recently released, Comali. Samyuktha Hegde too has gone on to become a heartthrob after her appearance as the second female lead in Comali opposite Jayam Ravi. Puppy directed by Nattu Dev, who is being promoted by the makers as Morattu Single, has generated quite a lot of excitement among fans after the motion poster and the trailer went on to receive a positive response from fans everywhere. With only 2 days remaining for its release, a new Puppy sneak peek video has now been released.

Being produced by Ishari K. Ganesh under the Vels Films International banner with music by Dharan, Puppy also includes Yogi Babu providing the comedic relief and will primarily revolve around youngsters and the issues they come across in their relationships. Producer Ishari K. Ganesh is on a roll these days after he tasted box office success with his LKG earlier this year and his Comali not long back and will be looking forward to Puppy too hitting a similar high note when later this week.

Check out the new Puppy sneak peek video below: