One of the most hot and happening heartthrobs of South Cinema - Vijay Deverakonda is somebody who has always taken the route less traveled and come up with unique ways to be the best at what he does! It is well known that he has turned producer and his maiden production venture Meeku Matrame Chepta (MMC), has hit the screens today! He has been actively involved with the promotions of this movie, for the past couple of day! Today, Vijay Deverakonda was spotted at a theatre, giving away not just movie tickets but also coupons for popcorn and refreshments to the audiences who turned up to watch the movie! 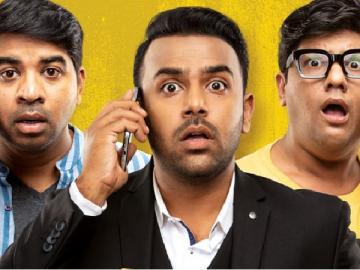 Vijay Deverakonda was spotted sitting behind the ticket counter, giving movie tickets and gifting the refreshment coupons to the audiences. The people who arrived at the theatres to watch Meeku Matrame Chepta were pleasantly surprised to see him there and the crowds thronged around him. Just his arrival at the theatre sent the crowds into a frenzy. Vijay Deverakonda's banner King of the Hill Entertainment has bankrolled this tragic comedy movie which sees Tharun Bhascker as the hero and Vani Bhojan as the heroine. Debutante director Shammeer Sultan has helmed this venture which also sees Abhinav Gomatam in a meaty role and Anasuya Bharadwaj in a brief appearance.

Tharun Bhascker, who earlier directed the super hit movie Pelli Choopulu was first seen as an actor in a supporting role in Falaknuma Das but this movie marks his maiden attempt at playing the lead. Small screen sensation Vani Bhojan is also debuting in movies through MMC. Sivakumar has composed the music for this venture which has cinematography by Mathan Gunadeva and editing by Sreejith Sarang. Stay tuned for updates...

Check out these pics of Vijay Deverakonda at the theatre:

Producer #VijayDeverakonda Promotes #Meekumatramecheptha in his style. Went to #PrasadsMultiplx and gave tickets to audience And gifted cinemagoers free popcorn and drink coupons- as it's his first Production and he wants them to enjoy fully.#MMCFunRideFrmToday pic.twitter.com/Jpr1cs2EFV