Intriguing teaser of Trisha's Raangi released! Check it out... 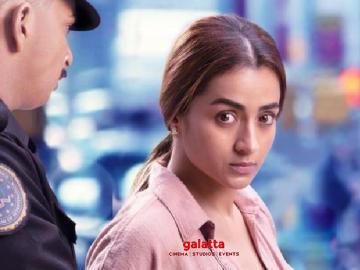 Just a couple of days back we had reported that there were just 5 more days of shoot left in Trisha's upcoming movie Raangi. However, the unit has already begun the post production work. This movie, directed by M Saravanan, is being produced by Subaskaran Alliraja under his Lyca Productions banner. This action thriller is nearing completion and the unit last finished a schedule in Uzbekistan. Now, the Raangi team launched this movie's teaser at the Darbar audio launch yesterday and it is highly catchy!

This 44 second teaser is extremely classy, racy and highly intriguing. The teaser promises a high-octane action thriller in the offing. Raangi is a heroine-centric movie and the intense first look showed Trisha being arrested by foreign Police and the second look had her looking bruised but with a fierce look and a pistol in hand. Now, the teaser shows Trisha herself to be an officer of some sort and there are quite a lot of action sequences. Mollywood actress Anaswara Rajan is making her Tamil Cinema debut with this movie. C Sathya is scoring the music for this movie, which has KA Shakthivel's cinematography and M Subarak's editing.

The evergreen Trisha has quite a few other movies in hand, including another female centric movie Garjanai, which is being delayed as is the highly expected Sathuranga Vettai 2, which also has Arvind Swamy in the lead. Paramapadham Vilayattu, 1818 and Sugar are in various stages of production. Recent speculations also state that Trisha might be playing an important role in director Mani Ratnam's magnum opus Ponniyin Selvan. Meanwhile, the teaser of Raangi states that this movie would be releasing in 2020! Stay tuned for updates...

People looking for online information on Tanvishani,,Amoolya,Lasya will find this news story useful.