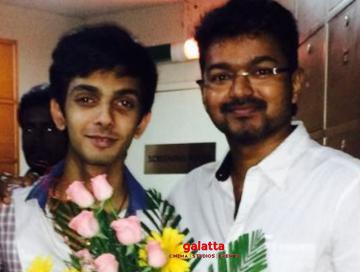 Actor Vijay’s upcoming film tentatively titled, Thalapathy 64, announced to be coming out as a summer 2020 release is being directed by Lokesh Kanagaraj of Maanagaram and Kaithi fame. Being produced by Vijay’s close relative, Xavier Britto, under the XB Film Creators banner, the film also includes music being composed by Anirudh Ravichander and is the second occasion he is working on a Vijay film after the 2014 blockbuster, Kaththi. In the meantime, Vijay’s manager, Jagadish, who celebrated his birthday, was wished by Anirudh on Twitter for which the Thalapathy 64 line producer then went on thanked him for giving “wonderful songs” for the film. Check out their conversation below:

There are massive expectations surrounding Thalapathy 64 as well as the film's songs considering Anirudh had delivered satisfactory and chart-buster songs in Kaththi five years back. Since then, many have been waiting for the composer to reunite with Vijay and that wish has now come true with the film’s album now keenly awaited by many. As known already, one track in the film, which many speculate to be Vijay’s intro song in Thalapathy 64, was shot during the first leg of filming in early October.

The next schedule of Thalapathy 64 is currently underway at the Shimoga district in Karnataka and there is a strong buzz that ‘Makkal Selvan’ Vijay Sethupathi and Kaithi villain Arjun Das will begin filming their portions. Malavika Mohanan plays the female lead followed by Shanthanu Bhagyaraj, 96 actress Gouri G. Kishan, popular VJ Ramya Subramanian among others being cast in major supporting roles.