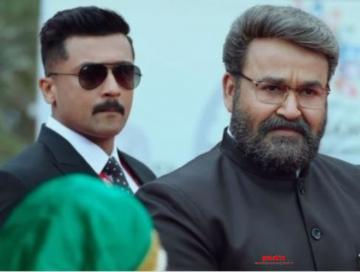 A film that was most awaited by Suriya fans everywhere, the action thriller, Kaappaan, hit screens towards the end of last month after being announced in early 2018 by Lyca Productions. Featuring some of the biggest stars from South India and smash hit music by Harris Jayaraj, Kaappaan has turned out to be a major victory for the team, who celebrated a success party yesterday. With the film already in theatres, the makers have been dishing out one treat after another for Suriya fans with video songs and unseen deleted footage. Now, Lyca Productions has released two back-to-back video songs - ‘Vinnil Vinmeen’ featuring vocals by Harris Jayaraj’s daughter, Nikitha Harris and lyrics by Vairamuthu followed by the ‘Machan Inga Vandhira’ track that includes vocals by Kharesma Ravichandran, Nikhita Gandhi, Shabnam and lyrics penned by Kabilan Vairamuthu and GK.

Kaappaan has many big names apart from Suriya among whom are Sayyeshaa playing the female lead followed by Mohanlal, Arya, Samuthirakani, Shamna Kasim, Boman Irani in supporting roles and Chirag Jani as the antagonist. With favorable reviews for the film, this third-time outing for Suriya, KV Anand and Harris Jayaraj after their previous ventures, Ayan and Maattrraan, has no doubt turned out to be a charm.

Check out the back-to-back Kaappaan video songs below: