Superstar Rajinikanth comes out to meet his fans and wish them Happy Deepavali! Photos inside... 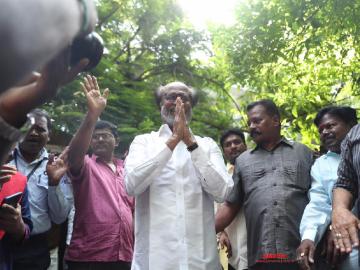 The festival of lights - Deepavali is being celebrated across our country and most of the people are having a joyous time with their loved ones. Early today, hundreds of Superstar Rajinikanth's fans had gathered outside his Poes Garden house, to get a glimpse of their favourite star. As a treat to all of them, the man himself - Rajinikanth, stepped out of his house and greeted all the fans gathered there and wished them all a very happy deepavali! His arrival sent all the fans gathered there into a frenzy and they all became very ecstatic.

Dressed in a simple white shirt and a dhoti, the Superstar looked as charming as ever and his smile was so pleasing to see. Currently, Thalaivar is working on Darbar, with director AR Murugadoss. This movie will see him donning the khaki uniform again, after a gap of nearly 26 years. Most of Darbar's shoot happened in Mumbai and we hear that most of the talkie portions have already been canned. Nayanthara is playing the female lead in this movie, which also has an ensemble cast including Suneil Shetty, Prateik Babbar, Dalip Tahil, Yogi Babu, Nawab Shah and a number of others.

Bankrolled by Lyca Productions, Darbar has music by Anirudh, cinematography by Santosh Sivan and editing by Sreekar Prasad. The team of Darbar released a new poster of Superstar Rajinikanth yesterday, as a Deepavali treat for his fans. Meanwhile, it has also been announced that Rajini would be joining hands with director Siruthai Siva for his next project, to be bankrolled by Sun Pictures. This movie is being tentatively called Thalaivar 168.