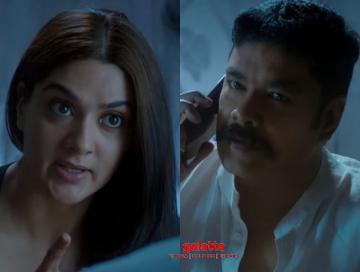 Director Sundar. C surprised fans in 2006 when he went on to make his acting debut in Thalai Nagaram, which became a massive box office hit with many lauding his partnership with comedian Vadivelu. Sundar. C’s last major starring role was in the 2016 film, Muthina Kathirika, after which he had gone back to direction full time. Now, the director turned actor is back on the big screen with the recently-released horror thriller, Iruttu, under VZ Durai’s direction.

Sundar. C has established himself to be a credible filmmaker over his two decade old career having delivered several commercial blockbusters while also working with numerous top stars as well. With Iruttu receiving a good word-of-mouth response from audiences, a second sneak peek scene featuring Sundar. C and Sakshi Chaudhary, who plays his wife in the film, has now been released. We also get to see VTV Ganesh making an appearance in a supporting role in this short snippet.

VZ Durai, who impressed fans with his films namely Mugavaree starring ‘Thala’ Ajith and Thotti Jaya with Simbu, has now made Iruttu, which also has actress Sai Dhanshika, Yogi Babu among others in major supporting roles. Being produced by Screen Scene Media Entertainment Pvt. Ltd, Girishh has composed the music for Iruttu while cinematography has been carried out by E. Krishnasamy and R. Sudharsan is the editor.