Karthi and Jyotika are starring together for the first time with the mystery action thriller, Thambi, directed by Jeethu Joseph of Papanasam and Drishyam fame. The film has got good amount of expectations from the fans after a promising teaser and trailer. Karthi and Jyotika play siblings in this film, while Sathyaraj will be seen as their father. The rest of the cast includes yesteryear actress Sowcar Janaki, Nikhila Vimal, Seetha, Anson Paul, Ramesh Thilak, Ammu Abhirami and Super Deluxe fame Ashwanth.

The latest update is that the film’s television satellite rights have been acquired by Star Vijay for a very good price. Vijay TV is known for broadcasting films in regular intervals and on that note, Thambi will reach the masses on a wider perspective. With an U/A certification from the censor board, the film is all set to release next Friday, on December 20 in wide number of screens. 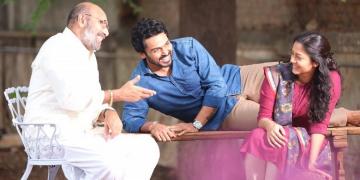 Karthi’s last outing, Kaithi was a super hit at the box office and on that note, the theatre exhibitors and distributors are anticipating Thambi to be a fitting successor. Produced by Viacom 18 Motion Pictures in association with Parallel Minds Production, Thambi has music by 96 fame Govind Vasantha and cinematography by R.D.Rajasekhar.

People looking for online information on Jyothika,Santhosh will find this news story useful.