Popular American singer-songwriter Elle King has welcomed her first child with her tattoo artist fiancé Dan Tooker. The joyous news was first announced by the 32-year-old's father, veteran actor Rob Schneider, who took to Instagram and wrote, "THE WORLD JUST GOT 8.1 POUNDS BETTER!! CONGRATULATIONS ELLE AND DAN!! LOVE, GRANDPA ROBBIE." The announcement came after King, who is also a  multi-instrumentalist, television personality, and actress, confirmed her pregnancy in March. At the time, she announced, "Me and @tattooker made a little human! We are very excited to share the news that we are pregnant. This news comes with a great deal of fear, and I hope that all mothers-to-be, in whatever sense that may be, know that I am trying to be very sensitive!" Below is Rob Schneider's deleted Instagram announcement of the birth of his grandson: 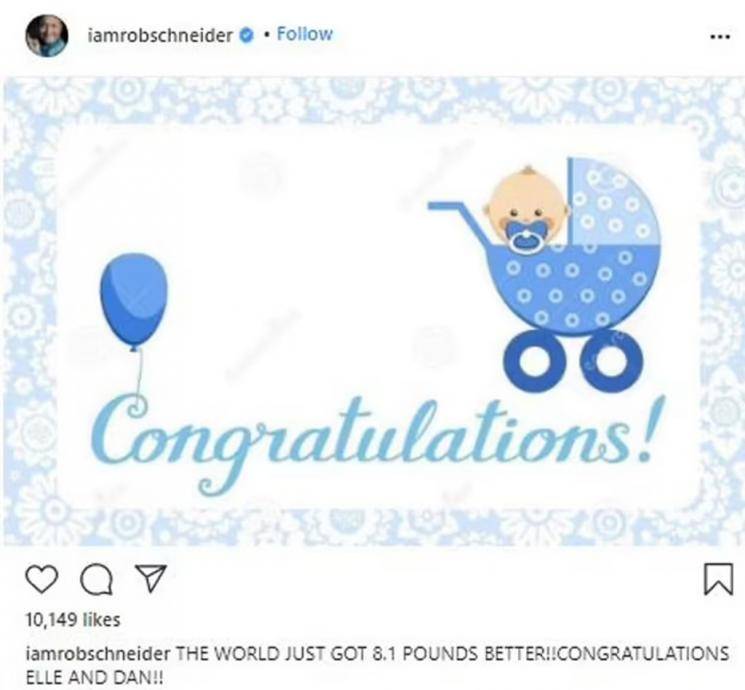 Elle King, who has also made appearances in films like Deuce Bigalow: Male Gigolo, The Benchwarmers, including last year's Love, Weddings & Other Disasters, explained at the time with "fear" and said, "This miracle baby comes after two very big losses." She further added, "It’s a terrifying and extremely painful experience for everyone. But the sun always rises, and I never really let go to let the universe decide when I was ready." Apart from providing the baby bump update to her fans on social media, the Exs and Ohs singer also showed a glimpse of her tummy at the Academy of Country Music Awards in April. King and Tooker got engaged in October 2020 after dating for a year before he proposed to her. In July, King showered praises on Tooker during her pregnancy calling him a "wonderful partner". She also sometime back posted a fun video of Tooker, who had a ball wrapped to his tummy to provide a first-hand experience on how pregnancy feels like.