Shruti Haasan joins this top hero for his next cop movie! Read on... 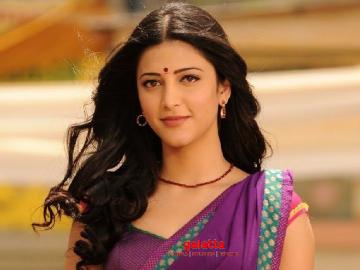 The highly talented and gorgeous Shruti Haasan was last seen on the big screens in 2017 with her last appearance being in the Hindi movie Behen Hogi Teri and in Tamil being Si 3, alongside Suriya. However, last year (2018) she was seen as the host of the TV show Hello Sago. She had apparently taken a break from work and earlier this year, announced her return by signing up for two movies - Power (in Hindi) and Laabam (in Tamil). Now, she has signed up for yet another biggie with a leading star, that too in Tollywood!

Yesterday, the makers of #RT66, Ravi Teja's upcoming movie, had revealed that a major announcement about the movie would be given out today and they have kept their word! B Madhu's Light House Movie Makers LLP banner, which is producing #RT66 has revealed that Shruti Haasan has been signed up to play the female lead alongside Mass Maharaja Ravi Teja in this project, which is to be directed by Gopichand Malineni. This is the third time collaboration between Ravi Teja and Gopichand, after their super hit movies Balupu and Don Seenu.

Coincidentally, Balupu was the first time Ravi Teja and Shruti Haasan were paired up and #RT66 will mark their second collaboration. Shruti was last seen in Tollywood, in the 2017 movie Katamarayudu which had Power Star Pawan Kalyan in the lead. Shruti will be seen alongside Makkal Selvan Vijay Sethupathi in the movie Laabam, directed by SP Jananathan! Meanwhile, Ravi Teja is also finishing up his portions for Disco Raja with director Vi Anand. #RT66 is touted to be a cop drama. Stay tuned for further updates...

Welcoming ..the multi talented actress ⁦@shrutihaasan⁩ on board 😊👍👍 #RT66 pic.twitter.com/Coym47HUDF