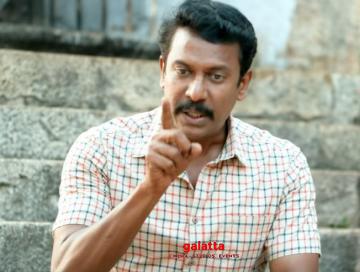 Samuthirakani's Adutha Saattai, which released last Friday (November 29), opened to mixed reviews from the critics and general audience. The film had a strong message that talked about the problems faced by students in private colleges.  The film, which happens to be the sequel of the 2012 released Saattai, is directed by Anbazhagan and produced by Dr Prabhu Thilak and Samuthirakani's Naadodigal. The film's star cast includes Samuthirakani, Athulya Ravi, Yuvan, Thambi Ramaiah, Rajashri Ponnappa, and others.

The makers have now released the video of the song, 'Kari Kaadu Dhane', which is composed by Justin Prabhakaran. This song is crooned by Sathyan Ilanko and has lyrics penned by Thenmozhi Das. This song is a feel good fun number that capturises the light hearted and positive moments in the lives of the college students.

As like the first part, the sequel also focuses on guiding students in the proper way and not pressuring them with studies.  Produced by Naadodigal, in association with 11:11 Productions, Adutha Saattai has cinematography by Rasamathi and editing by Nirmal. Those who haven't checked the video song yet, here it is:

People looking for online information on Samuthirakani,,Kaali will find this news story useful.