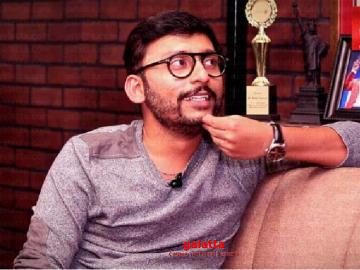 Radio Jockey turned actor turned hero, RJ Balaji is currently carving a niche for himself with his acting. He turned hero with the political satire movie LKG, which released earlier this year. Since then, fans have been eagerly waiting to see what he is going to come out with next. Just a couple of days back, Galatta Media reported the news that RJ Balaji's next project would see Nayanthara as the female lead and that this new movie would be titled Mookkuthi Amman. Now, RJ Balaji himself has posted a tweet with a cryptic message!

Of late, many of RJ Balaji's fans have been asking when he would return to commentating on Cricket matches and he responded to this with an interesting tweet. He mentioned that he would be returning to commentary for the third and final T20 international between India and Bangladesh, in the ongoing series. The tweet further added that he would be making a "BIG announcement" during this match! Now, all of his fans on Twitter are playing the guessing game with speculations ranging on a lot of subjects! However, the most likely announcement is to be regarding his next movie and people are waiting with bated breath to see what it is.

This new project is to be bankrolled by Dr. Ishari K Ganesh under his Vels Film International banner and RJ Balaji himself is said to have penned the story, screenplay and dialogues for this new movie. There are also reports that Nayanthara will be playing the titular role but will not be pairing up with RJ Balaji in this movie and that this movie could yet again be a spoof or a satire. Stay tuned for further updates...

Ill be there for the Sunday match and coming with a BIG announcement during the#INDvBAN final T20 on @StarSportsTamil 😇❤️ https://t.co/bG6DbD748a