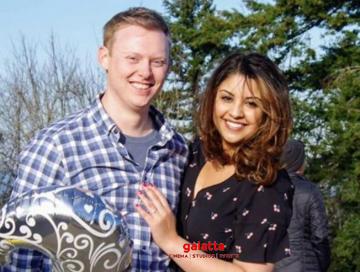 Richa Gangopadhyay hit the headlines when she emerged as the winner of the Miss India USA 2007 after which she made her acting debut in the Telugu film, Leader, in 2009, which subsequently was Rana Daggubati's first outing as a lead hero. Fans will know that the popular actress had announced her retirement from cinema last year saying it was only a short term fling and she had no desire to return again.

Richa Gangopadhyay, who went on to pursue her Master of Business Administration (MBA) in the US, had revealed earlier this year on her Twitter page that she had gotten engaged to her boyfriend and business school classmate Joe Langella, a former veteran of United States Army, after they met at the Washington University in St. Louis. That said, Richa has finally entered wedlock with Joe Langella in wedding ceremonies that were conducted in accordance to the Hindu and Christian traditions. Pictures of their wedding have gone viral on social media with reports stating they plan on settling down in the state of Michigan in the US. Check out their wedding pictures below:

Richa Gangopadhyay is known among fans in Tamil Nadu for starring in director Selvaraghavan's smash hit, Mayakkam Enna, in 2011, opposite Dhanush with many giving their double thumbs up for her performance. She was then seen in the same year in only one other Tamil film opposite Simbu, titled Osthi, which was the remake of Salman Khan's Dabangg. Richa also starred in one Bengali film before wrapping her career up appearing in three other Telugu ventures before walking away from cinema completely in the pursuit of a long-term career in business management.