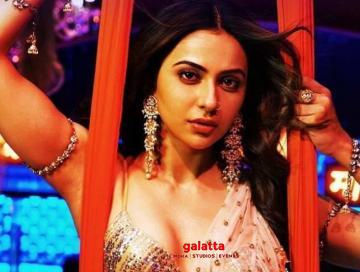 One of the most popular actresses in South India, actress Rakul Preet Singh became a notable name in Tamil by starring in popular films like Spyder, Theeran Adhigaaram Ondru, Dev and the smash hit, NGK, released earlier this year. She will next be seen in the upcoming Tamil sci-fi film tentatively titled, SK 14, opposite Sivakarthikeyan under R. Ravikumar’s direction with music by Oscar-winning composer A. R. Rahman and the biggie, Indian 2, alongside Kamal Haasan, Siddharth, Bobby Simha, Kajal Aggarwal among others under Shankar’s direction. That said, Rakul Preet had recently starred in the Bollywood film, Marjaavaan, alongside Sidharth Malhotra, Riteish Deshmukh and Tara Sutaria. Directed by Milap Zaveri, the mass action entertainer produced jointly by T-Series and Emmay Entertainment banners has had a fair share of promotion work being carried out. In that light, the makers have now released the much-awaited ‘Haiyo Ho’ video song from Marjaavaan featured on Rakul Preet Singh and Sidharth Malhotra.

Composed by Tanishk Bagchi, who has also penned the lyrics, ‘Haiyo Ho’ has vocals by Tulsi Kumar and Jubin Nautiyal, which incidentally has been adapted from the ‘Chahe Meri Jaan Tu Le Le’ song in the 1987 Vinod Khanna and Madhuri Dixit starrer, Dayavan. The ‘Chahe Meri Jaan Tu Le Le’ track was composed by the legendary musical duo Laxmikant-Pyarelal with lyrics written by Indeevar and crooned by Jolly Mukherjee and Sapna Mukherjee. As for Marjaavaan, the film has gone on to become a smash success across North India with plenty of commercial elements such as fast-paced action, sentiment and intense performances.

Check out the ‘Haiyo Ho’ video song below: