Rahul Sipligunj is the title winner of Bigg Boss 3 Telugu 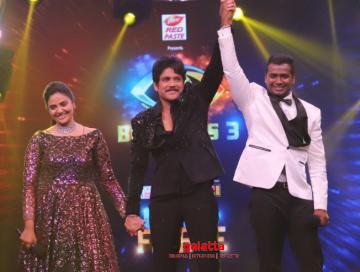 The third season of Bigg Boss Tamil ended last month and we saw Mugen Rao emerging as the title winner. The show was a grand success and it gave the much needed popularity and breakthrough for the contestants. Similarly, the Telugu version of Bigg Boss 3, came to an end last night. Popular singer Rahul Sipligunj was announced as the title winner of this show, hosted by Nagarjuna Akkineni. The title trophy was presented to Rahul by Megastar Chiranjeevi who was the Chief Guest of the finale episode. Television anchor Sreemukhi was announced as the runner up of the show staying a few votes behind Rahul.

Along with the trophy, Rahul also took home a prize amount of Rs 50 lakhs. The five finalists for this third season of Bigg Boss Telugu were Ali Reza, Baba Bhaskar, Rahul Sipligunj, Sreemukhi, and Arun Sandesh. As like the Tamil version, the contestants from the previous seasons were also present in the show, sharing their experiences.

Talking about Rahul Sipligunj, the talented folk based singer was recently known for his work in Ram Charan's Rangasthalam, which had music by Devi Sri Prasad. Rahul has been flooded with congratulatory messages and wishes from the fans and well-wishers in the industry. Congrats Rahul!

People looking for online information on Chiranjeevi,Najeem will find this news story useful.