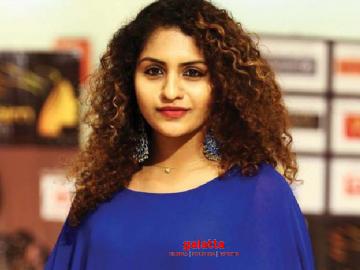 Noorin Shereef, the curly haired beauty, was the actual heroine of the much talked about Oru Adaar Love by director Omar Lulu! However, when the 'wink girl' Priya Prakash Varrier became an internet sensation, she turned out to be portrayed as the heroine of the movie. Noorin had been invited as the chief guest to inaugurate a supermarket in Manjeri, in Malappuram district of Kerala. While there, she was reportedly mobbed by the fans gathered there and had supposedly gotten injured on her nose. A visibly shaken and crying Noorin is said to have still continued to address the agitated crowd on the mic and calm them down.

Despite being injured and crying, Noorin inaugurated the store and spoke to her fans before leaving. Reports state that Noorin had been scheduled to arrive at the store by 4:00 pm but had come only by 6:00 pm and the fans had been waiting for so long to have a glimpse of her. This seems to have agitated the fans, who surrounded her car and mobbed her while one of them injured her nose. However, who injured Noorin Shereef is yet to be known.

Talking about this incident, Noorin's mother has reportedly told the media that they had arrived in time for the inauguration but the supermarket owners had kept them waiting for about 2 hours before they could come to the shop and inaugurate it. Reportedly, the shop owners wanted the crowd to build up more before Noorin arrived at the place. Also, there are said to be just four bouncers at the site and they could not handle the unruly crowd. We hope Noorin gets back to normal soon!

Check out the video of Noorin crying here: