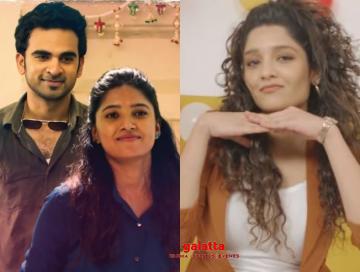 Romantic comedy has been a genre that has struck a chord with youngsters everywhere and the upcoming Tamil film, Oh My Kadavule, with its perky and attention-grabbing title will want to make it big when it comes out in theatres. Directed by newcomer Ashwath Marimuthu, the rom-com has Ashok Selvan and Irudhi Suttru actress Ritika Singh playing the lead roles with popular television star Vani Bhojan being cast as another female lead. Sha Ra and MS Bhaskar have been cast in vital supporting roles in this joint collaboration of Axess Film Factory and Happy High Pictures, which has music by Leon James while Meyaadha Maan fame Vidhu Ayyanna is handling cinematography. With promotions for Oh My Kadavule already underway, the makers have now released the peppy ‘Haiyo Haiyo’ song lyric video.

Composed and sung by Leon James, ‘Haiyo Haiyo’ has lyrics penned by Ko Sesha and is a lively track that will hit the high note with youngsters. Oh My Kadavule has generated quite a lot of expectations after it was revealed that ‘Makkal Selvan’ Vijay Sethupathi too will be making a cameo appearance in the film as was seen in the super-fun teaser that was released not long back.