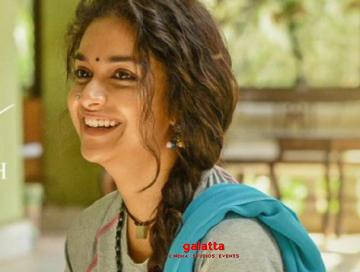 It has been a while since we saw Keerthy Suresh in Tamil cinema and her last film was Sarkar opposite Vijay. She will next be seen in a new film, titled Penguin, which is produced by director Karthik Subbaraj's Stone Bench Creations. Written and directed by debutant Eashvar Karthic, this film has music scored by Santhosh Narayanan. The shooting of this film, which began on September 12th, has now been wrapped completely. Yes, the shooting of Penguin is finished and will now enter the post production stages.

The film's cinematography and editing are handled by Kharthik Palani and Anil Krish respectively. The film will feature Keerthy Suresh as a pregnant woman and the premise by itself is expected to hook the audience to their seats. Apart from Penguin, Keerthy Suresh is awaiting the release of her next Telugu film, Miss India, which is right now in the post production stages.

Keerthy will also be looking forward to start shooting for her debut Hindi flick opposite Ajay Devgn in Maidaan, produced by Boney Kapoor and directed by Amit Sharma of Badhaai Ho fame.