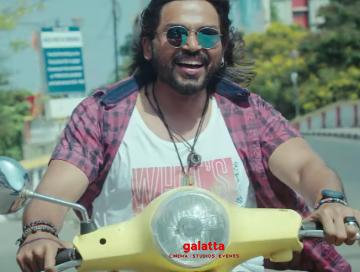 Karthi's last release Kaithi, which came out for the festive occasion of Diwali, was a big hit at the box office that also earned critical acclaim for its strong content and making. His next release would be Thambi, his film with director Jeethu Joseph of Drishyam and Papanasam fame. Karthi is sharing screen space with his anni Jyotika for the very first time and the project made the fans excited ever since its announcement. The audio launch of the film happened this morning at Sathyam Cinemas and the entire team of Thambi were present at the event, apart from actor Suriya who was the chief guest of honour.

The makers have now released the video of the song, 'Hello Saare', an uber cool fun number, composed by 96 fame Govind Vasantha. This song is crooned by Suresh Peters and has lyrics penned by Karthik Netha. The visuals look rich and pleasant and we see Karthi in a stylish funky makeover and he seems to be a carefree person who wants to celebrate life. The teaser of the film, which came out a few days back, opened to a positive reception and had showed some good promise.

With a proven director like Jeethu Joseph at the helm, the trade expects Thambi to be an intriguing crime thriller that will take the box office by storm. Karthi and Jyotika will be seen as siblings in this mystery crime thriller which has Sathyaraj playing the duo's father character. The film has cinematography by ace lensman R.D.Rajasekhar.

The music rights have been acquired by Lahari Music and the video song of 'Hello Saare' has been released on their channel. With an U/A certification from the censor board, Thambi is scheduled to hit the screens on December 20 along with Sivakarthikeyan's Hero. Get set for an intriguing thriller on the 20th of December. Until then, catch the video song of 'Hello Saare' from Thambi here: