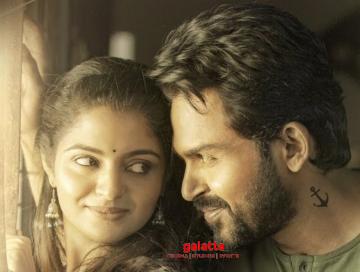 Actor Karthi’s next film titled, Thambi, under Papanasam fame Jeethu Joseph’s direction will be the first ever time he is starring alongside his sister-in-law, Jyothika, and is coming out in theatres worldwide on December 20. Featuring music by 96 fame Govind Vasantha, the film will be the third and final release for Karthi after kicking off the year with Dev and followed it up with the blockbuster, Kaithi, which came out this Diwali. With the audio launch held recently in Chennai, promotions for Thambi are underway in an extensive manner and a new promo for a song titled ‘Thaalelo’ from the film has now been released.

‘Thaalelo’ has been sung by Chinmayi and is featured on Karthi and Nikhila Vimal with lyrics penned by Karthik Netha. A joint collaboration of Parallel Minds and Viacom18 Studios banners, Thambi will be distributed by SDC Picturez in Tamil Nadu with the film’s star cast also including popular names like legendary actress Sowcar Janaki, veteran actor Sathyaraj, Ilavarasu, Super Deluxe fame, child artiste Ashwanth Ashok Kumar among others in major supporting roles. The film has generated quite a lot of buzz among fans after an action-packed and intriguing teaser was released a while back with many now expecting the makers to unveil a trailer as well next.

Watch the 'Thaalelo' song promo from Thambi below: