Kamal at Galatta Nakshatra Awards to air on Colors Tamil

Kamal Haasan states he is not a complete artiste yet! 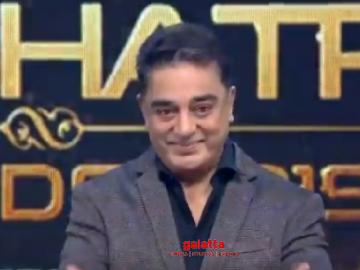 Galatta Media successfully conducted the second edition of the Galatta Nakshatra Awards in October. The Galatta Nakshatra Awards was instituted by Galatta Media in 2018 for honouring stars from the world of Television, Radio and Internet, on the same stage! The success of this event lead us to conduct the second edition of this event on a grander scale with a lot more celebrities. The event was graced by the legendary Kamal Haasan who spoke at the event and also gave away a few awards. This event turned out to be a resounding success and Kamal's speech received rapturous applause.

During his speech, Kamal spoke about his career, his association with Rajinikanth, his political journey and quite a lot more. There was also an interactive session with RJ Balaji and DD posing questions to the Ulaganayagan on his career and politics. As is usual, there were quite a lot of gems in Kamal's speech and for those who missed the catching the event live, Colors Tamil channel is telecasting the ceremony on their channel, today night.

The Galatta Nakshatra Awards 2019 will be telecast on Colors Tamil TV channel at 8:00 pm tonight. Apart from Kamal Haasan's speech, there will also be performances and many different celebrities gracing the event. Deserving stars from across different TV channels were selected for various awards and based on public voting, were given awards. Tune in to Colors Tamil tonight, to watch the event!