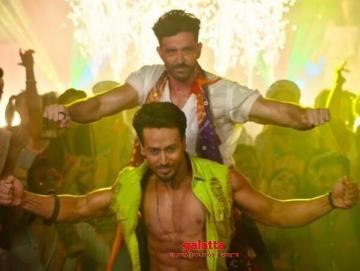 Bollywood stars Hrithik Roshan and Tiger Shroff shared screen space for the first time in the recently released action thriller film War. The film directed by Siddharth Anand is produced by Aditya Chopra under the banner of Yash Raj Films. War has Vaani Kapoor as the lady lead with stars like Ashutosh Rana, Dipannita Sharma, Anupriya Goenka, and Dishita Sehgal playing important roles. Music for War is composed by Vishal–Shekhar and lyrics written by Kumaar. War hit the theatres on October 2nd and the film has crossed the 300 Crore mark at the box-office.

Jai Jai Shivshankar is one of the hit numbers from the album of War and the team has now released the full video of the song. Composed by Vishal - Shekar, the song is crooned by Vishal Dadlani and Benny Dayal with the lyrics penned by Kumaar. The upbeat number features Hrithik Roshan and Tiger Shroff and both the stars have danced like never before. The colourful video will blow your mind for sure. Check out the video below,