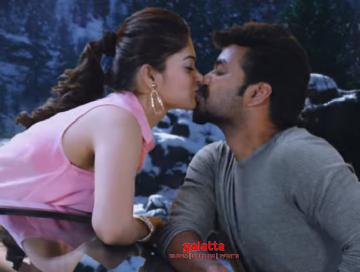 Veteran director and actor S.A.Chandrasekar has made an adult romantic comedy film featuring Jai, Vaibhavi Shandilya, and Athulya Ravi in the lead roles. Titled as Capmaari, the film released last week, opening to mixed and negative reviews from critics and fans. The film failed to make a mark and didn’t receive a favourable response at the box office. The makers have now released a new video song which was deleted from the film. This deleted video song is called ‘Romba Romba Pudikkum’ and it is a romantic number featuring Jai and Vaibhavi Shandilya.

The song is crooned by Jagdeesh and Neha Nair with lyrics penned by Mohan Rajan. This video is shot in an old school method and the highly evident computer graphics make it look artificial. The video song has got a mixed response from the fans on YouTube and it can be seen through the comments. There are two interesting aspects to notice in Capmaari; this is SAC's 70th directorial project, while for Jai, it is his 25th film as a hero. On the technical front, Capmaari has music by Siddharth Vipin, cinematography by Jeevan and editing by GK Prasanna.

The film got an ‘A’ certificate for its adult content and was strictly catered to the college-goers and youngsters This new video song has been released on the official YouTube channel of Lahari Music who owns the film’s audio rights. For now check out this newly released deleted video song, ‘Romba Romba Pudikkum’ from Capmaari here (below the images):

People looking for online information on ,HridayRaj will find this news story useful.