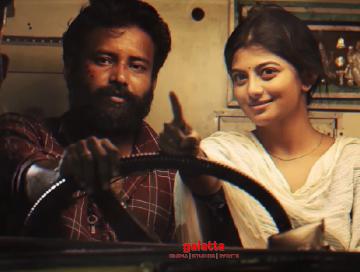 Director Pa Ranjith ventured into production with the acclaimed Kathir starrer Pariyerum Perumal which was raved by the critics and made a huge impact among the audience. Post the success of Pariyerum Perumal, Pa Ranjith officially announced his second production venture, Irandaam Ulagaporin Kadaisi Gundu, starring Attakathi Dinesh, Anandhi, and Riythvika in the lead roles. This project kept the film lovers interested who were looking forward to see the film. Directed by debutant Athiyan Athirai, this film is in the final stages of post-production and is gearing up to hit the screens on December 6.

The theatrical trailer of this film opened to a positive reception from the fans and general audience. From the trailer, Dinesh looked completely justifying in this character and this film will be a major breakthrough in his career. The songs of the film have released today (November 20) and it is expected to impress the music lovers for the freshness in the sounds and the mood. Here is the lyric video of the song 'Irul Vaanam', which is composed by Tenma.

This beautiful melody number is crooned by Susha while the lyrics have been penned by Uma Devi. The deeply meaningful lyrics, along with Tenma's fresh treatment adds up to the likability. The song has been released on Think Music's official YouTube channel. Irandam Ulagaporin Kadaisi Gundu has cinematography by Kishore Kumar and editing by Selva RK. If you haven't checked out the Irul Vaanam song yet, catch it here: