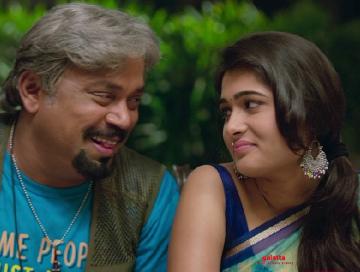 G.V.Prakash Kumar was last seen in the recently released emotional action drama, Sivappu Manjal Pachai, directed by Sasi. The young composer turned actor was praised for his powerful performance as Madhan, an illegal bike racer. GVP's next release would be 100% Kaadhal, the romantic drama, directed by MM Chandramouli. With Arjun Reddy fame Shalini Pandey as the female lead, this film is produced by Sukumar and Bhuvana Chandramouli under the banner of Creative Cinemas NY and NJ Entertainment. The trailer promised that the film will be a youthful romantic entertainer.

We also saw Shalini Pandey in a glamorous avatar and her chemistry with Gv Prakash is expected to be the major highlight of the film. The makers have now released a new scene from the film as a sneak peek and it is a comedy scene. We see an interaction happening between GV Prakash, Shalini Pandey and Thambi Ramaiah, that is treated in a light hearted manner.

100% Kaadhal is shot by cinematographer Ganesh Rajavelu and cut by editor Mu Kasi Viswanathan. This film is the remake of the 2011 Telugu film, 100% Love, directed by Sukumar. Scheduled to release tomorrow (October 4), this film might attract the youngsters. For now, check out the new sneak peek released by the makers: