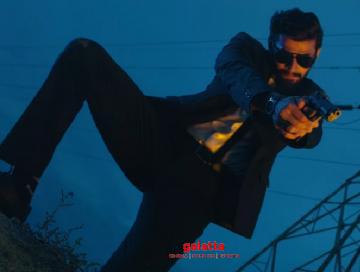 Director Gautham Vasudev Menon will finally see the release of his long delayed film, Enai Noki Paayum Thota, which will be hitting the screens tomorrow (November 29). Ahead of the release of ENPT, the teaser of Gautham Menon's next film, Joshua: Imai Pol Kaakha has now been released.  This visual first look establishes the film's protagonist, Joshua, who is a hitman out there to save and protect one of his high profile clients, Kundhavi Chidambaram. She is the female lead of the film and the character is played by newcomer Raahei.

From what we see in this teaser, the film is stylishly shot with the classy touches of GVM seen all through it. The teaser is packed with lots of action and the film also promises to be high on that. The extent to which Joshua goes to protect Kundhavi from all the odds forms the plot. Varun, as a full fledged lead hero, shows good promise and it must definitely be a big leap in his career. A section of audience do feel that the film's theme, mood, and the treatment looks quite similar to Gautham's previous films. However, it is quite early to decide on that.

The teaser progresses through the 'GVM-ish voice over narration where the protagonist explains his situation and the problems he is going to be facing. Joshua has music by Darbuka Siva and the ENPT success combo will repeat once again with this film as well. S.R.Kathir's visuals enhance the viewing experience and his work plays a major part. Produced by Vels Film International, Joshua: Imai Pol Kaakha is scheduled to hit the screens for Valentine's Day 2020. For now, check out the visual first look teaser here (below the images):