Big thanks to Adithya Varma team! 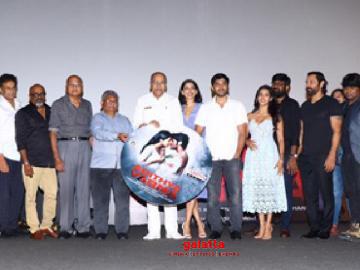 One of the most expected movies of this year - Adithya Varma, hit the screens a couple of days back and is doing well in the theatres. This movie, the official Tamil remake of the blockbuster Tollywood movie Arjun Reddy, launched Chiyaan Vikram's son Dhruv Vikram, into the world of Cinema! Directed by Gireesaaya and produced by Mukesh Mehta for the E4 Entertainments banner, Adithya Varma also stars Banita Sandhu and Priya Anand as the female leads! Anbu Thasan of Kolamaavu Kokila fame plays Dhruv's friend in this movie!

We at Galatta Media are very thankful to the entire team of Adithya Varma for giving us the honour of being the movie's Media Partner and we cherish the privilege. The second sneak peek of the movie was also launched exclusively through us and it received quite an overwhelming response from the audiences. Lots of praise has been coming in for Dhruv Vikram's acting in this movie and the youth audiences are giving an amazing response for the film at the theatres. Reports state that after a very good opening on the day of the release, the footfalls have only been picking up very positively in the theatres over the weekend.

Arjun Reddy catapulted its hero Vijay Deverakonda into the big leagues and Adithya Varma is sure to be a great launch to Dhruv's career. Director Sandeep Vanga, who made the original, also helmed the Hindi remake titled Kabir Singh and Shahid Kapoor's performance fetched him rave reviews. Despite Adithya Varma being the second remake of Arjun Reddy, it is Dhruv's endearing performance that has reached out to the audiences and is bringing them into the theatres!